In 1996, lying on a mat under the stars in south India listening to 100 girls chatting in Telugu before going to sleep amidst the croaking frogs with whom we shared our outdoor bedroom, I knew “grassroots” education would be my life’s purpose.

Today, Women’s Education Project (WEP), an NGO I started almost 20 years ago, has helped more than 2,000 impoverished women complete their schooling and 1,200 fulfill career dreams as laboratory and IT technicians, teachers, legal assistants, hotel administrators, bankers, and entrepreneurs. One a dentist, another a physical therapist, and third an environmental engineer.

It all started when I spent my senior year, not in Madison at the University of Wisconsin, but in  Hyderabad, India, a country I had never visited and, in retrospect knew even less about, but had always intrigued me. As Wisconsin’s year abroad promised full immersion, I jumped at the opportunity.

I learned Telugu, the local language, while teaching English to former girl child laborers. This took place at a small NGO in a farmhouse building with a courtyard serving as our aforementioned bedroom. The students were poor, their hands often burned from feeding the hot ovens of a biscuit or bangle factory.  Many were holding pencils for the first time. All were eager to learn.

Five years later, I was invited to run the University’s study abroad program in Madurai, Tamil Nadu, also in South India. To help our American students in the Tamil language, we employed a translator, a remarkable young woman named, Priya.* But it was only after a full year had passed when she invited me to her home for tea that I learned how truly remarkable she was. For Priya, fluent in five languages, who every day came to work immaculately dressed, often with jasmine in her hair, was, and had been for several years, the sole support of her five-member family. 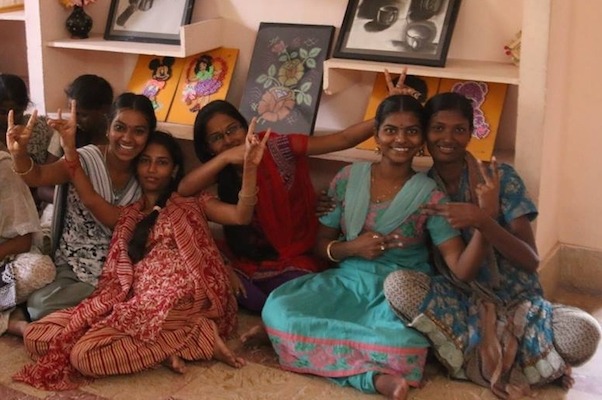 Priya’s mother, who kept her hands and feet in the folds of her sari smiled when I entered, but because of her leprosy, did not rise from the floor. Her father, an alcoholic, was passed out in the next room. Her small brothers played outside. While loan sharks frequently interrupted family meals demanding payment, Priya had dreams, and getting an MBA was on top of her list.

That summer back in New York, I thought often about Priya. More than anything, I wanted her to get her MBA. My friends and I held a fundraiser and raised $3000 – enough to pay Priya’s three years full tuition at an MBA program in Madurai. Today, Priya is happily married with a son working as a Director at an International Bank.

Helping this young woman with such untapped potential, made me think again of the girls in Hyderabad and their nighttime chatter. The stark reality was that, irrespective of their hopes and ambitions, most would never go beyond the 10th grade, maybe even drop out before. They would marry, have their first child before eighteen, and remain in menial employment. I realized that there were literally millions of these young women, who like Priya, had their dreams, but were trapped not only by their poverty, but by social and family expectations.

Daily, students would come to the house after school or work to study, laugh, often dance, and discuss their problems, challenges, and dreams. It was the one place in their lives, they had a voice and where someone would listen.

New students, often shy, would enter with a dull look in their eyes. Soon however, away from the pressures of home and society, amongst peers and friends they would begin to smile, then laugh, and soon find the courage to voice their opinion.  The community we created – a Sisterhood – became central to our purpose and a pillar of our philosophy.

Infusing our underlying values into the ever-improving program is an ongoing process.  Because of their Sisterhood, young women at every stage of their own achievement contribute to their own and WEP’s success.

Next … How WEP discovered the importance of Follow Through, another core value of WEP.